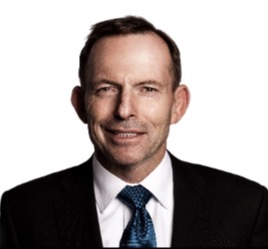 The Hon. Tony Abbott AC was elected Prime Minister in 2013 and served for two years.

In his time as PM, the carbon tax and mining tax were repealed, free trade agreements were finalised with China, Japan and Korea; the people smuggling trade from Indonesia to Australia was halted; Australia became the second largest military contributor to the US-led campaign against Islamic State in Iraq; the biggest federally-funded infrastructure program in Australian history commenced; and Australia hosted the G20 meeting of global leaders in Brisbane in November 2014.

As opposition leader at the 2010 election, he reduced a first-term Labor government to minority status before comprehensively winning the 2013 election.

Tony Abbott AC served as the member for Warringah in the Australian parliament between 1994 and 2019.

He is married to Margaret and they are the parents of three daughters – Louise, Frances and Bridget.