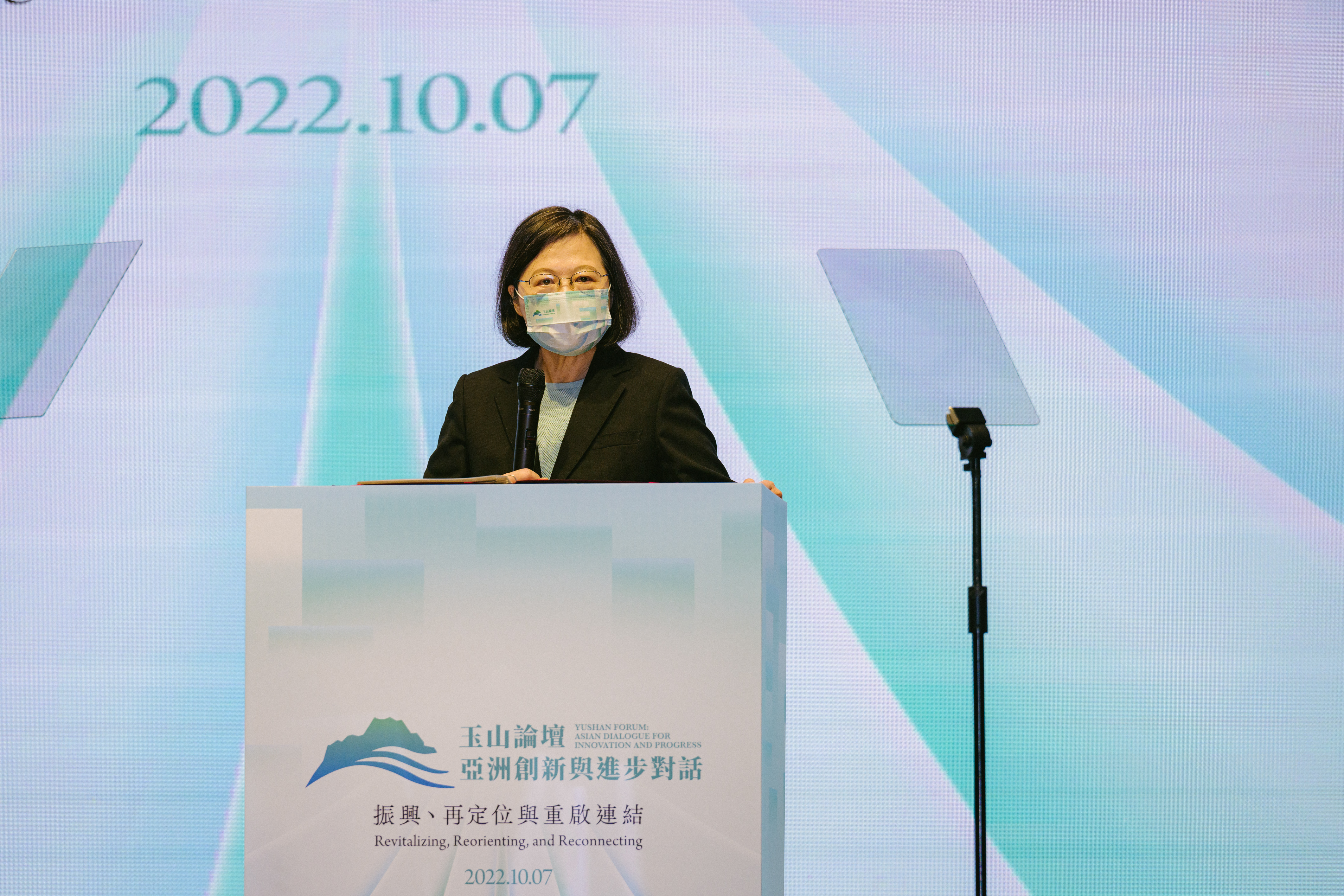 Established to gather great minds to brainstorm on the regional development agenda, the 2022 Yushan Forum: Asian Dialogue for Innovation and Progress took place today (Oct 7). When opening the Forum, President Tsai Ing-wen remarked that to sustain the democracy that Taiwan has long worked to uphold, a new regional framework that advances collaboration between like-minded countries is needed. And in the case of Taiwan, the New Southbound Policy will be at the center of its Indo-Pacific strategy.

Taiwan-Asia Exchange Foundation (TAEF) organized the Yushan Forum in 2022 by setting its theme on “Revitalizing, Reorienting, and Reconnecting,” aiming to extend the discussions of resilience building and regional cooperation during the darkest times of COVID-19 to more pragmatic revitalization practices today, with a particular focus on the collaboration between Taiwan and the New Southbound Policy (NSP) target countries and like-minded allies. This year, the Forum welcomed 31 international speakers from 13 countries, including the Republic of Palau, New Zealand, Japan, Australia, Canada, the United States, India, the Philippines, Malaysia, Germany, Thailand, Indonesia, and Luxembourg through a hybrid format.

President Tsai Ing-wen and Chairman Hsin-Huang Michael Hsiao of TAEF commenced the forum with their remarks. Also speaking during the opening were leaders from the Republic of Palau, New Zealand, and Japan.

In his welcoming speech, Hsin-Huang Michael Hsiao emphasized that the Yushan Forum is the most visible platform demonstrating how the PPPP (Public-Private-People Partnership) model can play a more important role in post-pandemic revitalization efforts. He highlighted that despite being challenged by the pandemic, TAEF has successfully achieved international exchanges, which has led to the inauguration of an unprecedented high-level Taiwan-India Dialogue on October 8. In addition, it has published four policy reports this year, with three examining Taiwan-India, Taiwan-Southeast Asia, and Taiwan-Australia ties, respectively, and a New Southbound Policy report, the first of its kind that combs through the contributions and gaps to be filled of this paramount foreign diplomacy of Taiwan.

President Surangel S. Whipps, Jr. of the Republic of Palau stressed the need to raise regional partnerships to a new level at this critical juncture, especially by sharing our resources. He reminded us that to see the real light at the tunnel of COVID-19 would “require us to work thoughtfully, and work together.”

During his remarks, Former New Zealand Deputy Prime Minister Winston Peters repeated the following rhetorical question recognized Taiwan’s success as a world leader both economically and socially. He showed his unwavering support to Taiwan by repeating the rhetorical question thrice, “If there were more Taiwans, would this world be a better place?” And the room echoed with a definite yes.

Keiji Furuya, a member of the Japanese House of Representatives said that it is now more important than ever for like-minded countries to work together. With the longstanding mutual aid that Japan and Taiwan provided to each other in times of need as well as the robust exchanges in infrastructure development, Taiwan will be able to feel how close the two countries are. He ended his remarks with a quote from former prime minister Shinzo Abe, “A Taiwan’s contingency is a contingency of Japan.”

Taro Aso, Former Prime Minister and Vice-President of the Liberal Democratic Party of Japan showed his support by delivering a pre-recorded video remark. He reiterated that the statement, “Attempting to unilaterally change the status quo by force,” is prohibited anywhere in the world. He called for the Yushan Forum to assume its role in reaffirming the statement “in order to maintain stability and mutual understanding of the region and the world.”

As the COVID-19 pandemic enters its third year, the world is beginning to see some light at the end of the tunnel. Witnessing the growing activity within and across countries stronger than in pre-COVID times, it is clear that countries are now demanding an agenda beyond recovering to the old norm – and Taiwan and the region should be fully involved in the processes.