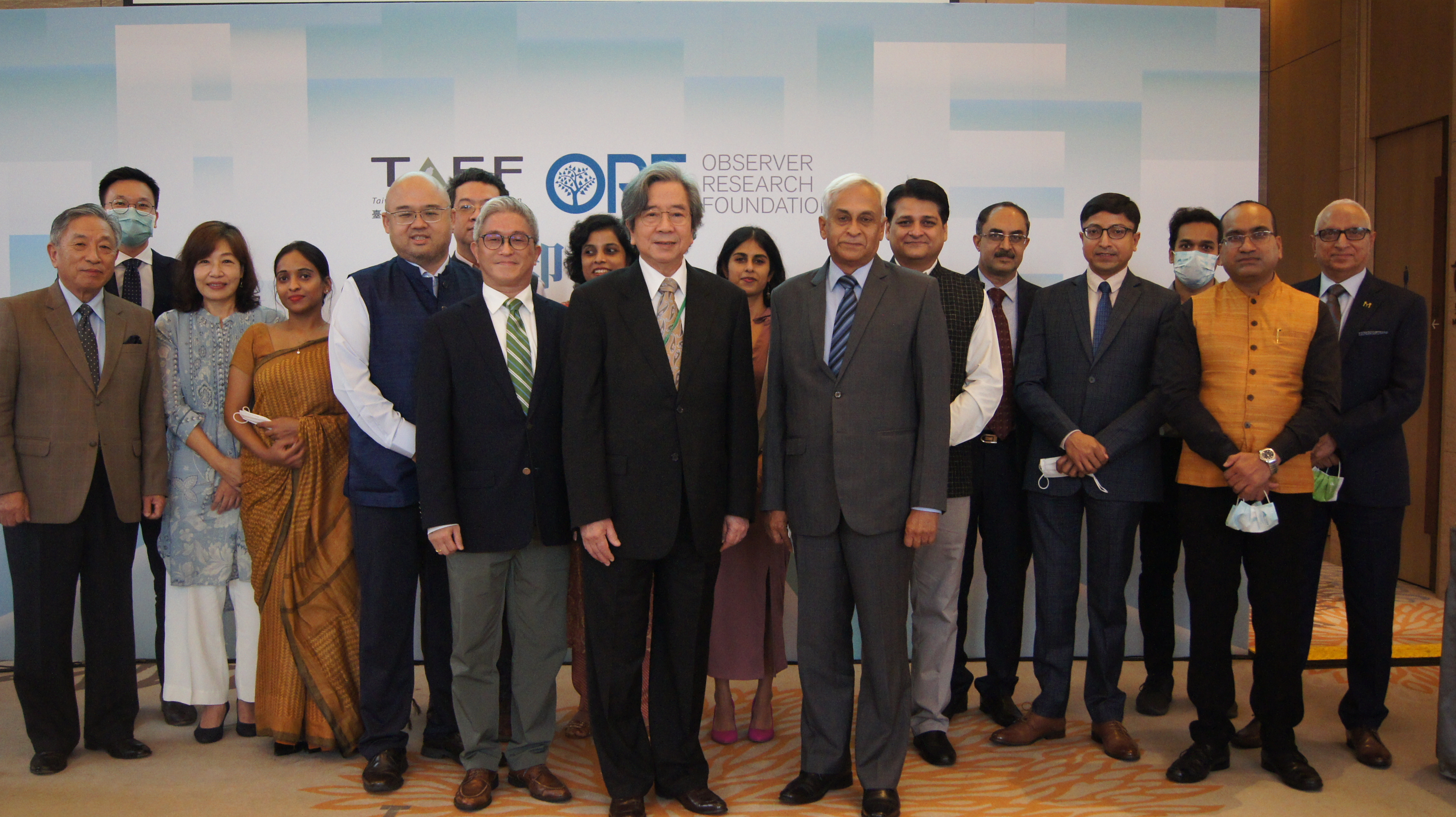 TAEF and ORF entered into a three-year partnership by signing an MoU in May this year. An important initiative agreed upon in the MoU is the organization of an annual dialogue that will take place alternatively between Taiwan and India.

Chairman Hsiao remarked that the dialogue’s inauguration is a testimony of the TAEF and ORF being on the same page to prioritize the promotion of Taiwan-India ties. He emphasized that with Taiwan’s New Southbound Policy (NSP) being complementary to India’s Act East Policy, both sides should work closer together by looking at several niche areas to create meaningful synergy.

Vice President Pant echoed that Taiwan and India are now in a hugely influential position in both the Indo-Pacific and international security. Both sides should harness the complementary nature of NSP and Act East Policy to take the bilateral ties forward. In particular, he emphasized the importance of taking advantage of youth leaders on both sides.

In his remarks, Deputy Secretary General Hsu highlighted that Taiwan-India relations are now at an all-time high as India has become a priority under the NSP. Meanwhile, India has also voiced concern for the militarization of Taiwan Strait by the PRC. He

said that when geopolitics is quickly expanding in the Indo-Pacific, think-tank dialogues play a significant role in integrating government and civil society to establish reliable platforms for communication.

Deputy Minister Tien remarked that Taiwan and India possess complementary strengths, where India is the leader in software and Taiwan is the leader in hardware. In addition, both embody the shared values of freedom, democracy, and rule of law. Therefore, it is just the right time to take our bilateral ties to the next level to safeguard the peace and stability of the rule-based order in the Indo-Pacific.

Director General Das stressed in his remarks that India can be the gateway to the NSP. Apart from technological collaboration, tourism is another niche area to be tapped into as the COVID-19 pandemic is coming to a close. He believed that Taiwanese tourists visiting India would be hugely economically impactful.

The dialogue comprised three sessions, examining (1) the roles of Taiwan and India in safeguarding stability and security in the Indo-Pacific; (2) bilateral economic and technology ties in promoting regional prosperity and growth, and (3) prospects of Taiwan-India partnership.

The event was followed by a dinner banquet afterward. Chairman Hsiao and MP Sujeet Kumar welcomed the guest with a brief remark celebrating the success of the dialogue and looking forward to a more advanced partnership between the two countries. Legislator Wu Yu-Chin, who is also the Chairperson of Taiwan-India Parliamentary Friendship Association, was not able to attend the dinner in person but has prepared a remark to congratulate the dialogue. She mentioned that she will continue to support think tanks’ efforts in promoting Taiwan-India ties.

Founded in 2018, TAEF is the first Taiwanese policy think tank with a focus on Southeast Asian and South Asian affairs. In the spirit of Taiwan’s New Southbound Policy (NSP), the goal of TAEF is to help strengthen the comprehensive ties between Taiwan and the 10 ASEAN countries, India and other five South Asian countries, as well as Australia and New Zealand through collaboration and exchange among think tanks, non-governmental organizations (NGOs) and young leaders. TAEF is devoted to consolidating a sense of regional community in Asia and establishing long-term cooperative partnerships among Asian societies. TAEF was selected as one of the world’s best new think tanks for three years in a row by the Global Go To Think Tank Index Report.